Since ancient times, people of Kyoto have long wished to channel water from Lake Biwa to Kyoto.
However, technologies to accurately take measurements, create drawings of the land and excavate long tunnels were not readily available.
Overcoming such obstacles, the long awaited project to draw water from Lake Biwa was finally realized by Kunimichi Kitagaki, the third governor of Kyoto Prefecture.
Kitagaki decided to develop the "Lake Biwa Canal", which still plays an active role today, in order to revive Kyoto which was in decline due to war damage at the end of the Edo period and furthermore due to the relocation of the capital from Kyoto to Tokyo which was one of the measures taken as part of the Meiji Restoration. 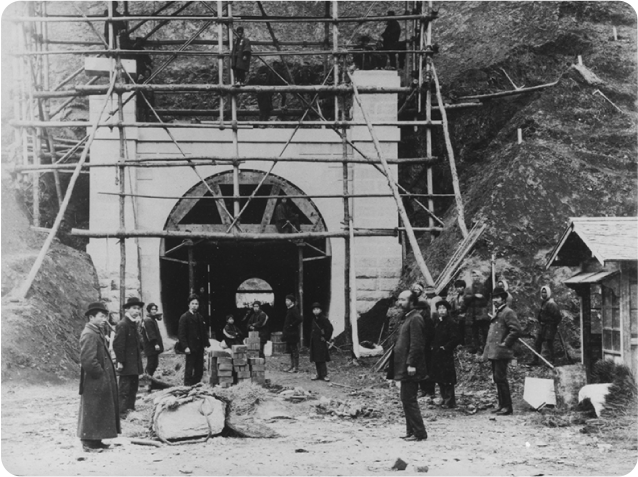 Tunnel construction at the east entrance of the First Canal, Second Tunnel (Meiji 21 (1888)) 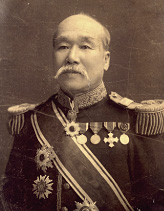 1836 - 1916
He implemented various measures to modernize Kyoto, where industries suffered due to the relocation of the capital. Of the many successful projects implemented, one of his most representative and greatest achievements was the planning and the construction of the Lake Biwa Canal. Other achievements include establishment of the Kyoto Chamber of Commerce and Industry, excavation and construction of the road between Kyoto and Miyazu, and successful campaign to bring to Kyoto the Third Higher School, which was merged with other schools to create what is now Kyoto University. 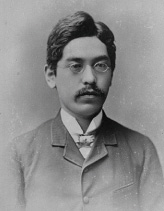 1861 - 1944
At the age of 21, Sakurou Tanabe, a fresh graduate from Kobu University (today, the Faculty of Engineering, Tokyo University) was appointed Chief Engineer for the construction of Lake Biwa Canal by Governor Kitagaki. At a time when the design and supervision of every major civil engineering work was conducted by foreign engineers, Lake Biwa Canal became the first civil engineering project in Japan constructed completely by Japanese engineers and workers, headed by Sakuro Tanabe.

The seven initial purposes of the construction of the First Canal were: manufacturing machinery, transportation, rice field irrigation, rice polishing water mills, fire prevention, waterworks and sewerage. However, hydraulic power generation was added to the list after Sakuro Tanabe saw a hydraulic power plant during his trip to the United States as part of his research on water usage.
The First Canal was completed in Meiji 23 (1890). Upon completion, there were 3 main uses for the First Canal. 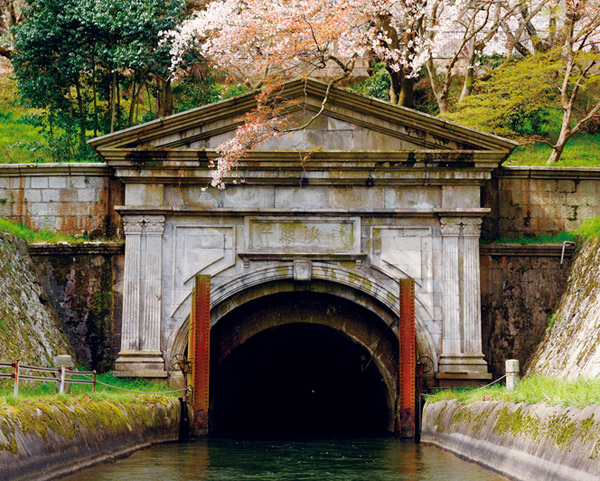 Main Uses of the First Canal

The Keage Power Station became the first commercial hydroelectric plant in Japan.
Using the water of Lake Biwa, it generated electricity, which was used to power electric lamps and machines.

Completion of the canal enabled rice, charcoal, wood, stone, etc. to be transported by ship between Otsu, Fushimi, and Osaka. The canal also became popular with tourists and many pleasure boats operated there. At Keage and Fushimi-Sumizome, where there was a significant difference in level, inclined planes were built to transport boats up and down, and boats could be seen moving on and off the carts of these incline planes.

About the Construction of the First Tunnel

The most difficult part of the construction of the First Canal was the First Tunnel, which at 2436m long, was the longest tunnel to be constructed in Japan at the time. Today, the first shaft (47m) and the second shaft (20m) are still in existence.
There are four tunnels along the boat route and with the exception of Moroha Tunnel, the tunnels have stone tablet signs above the tunnel entrance called "hengaku".
The hengakus hold great historical significance as they were all inscribed by politicians who defined the Meiji era.

"Kishobansen", a hengaku inscribed by Hirobumi Ito (first prime minister of Japan) on the First Tunnel 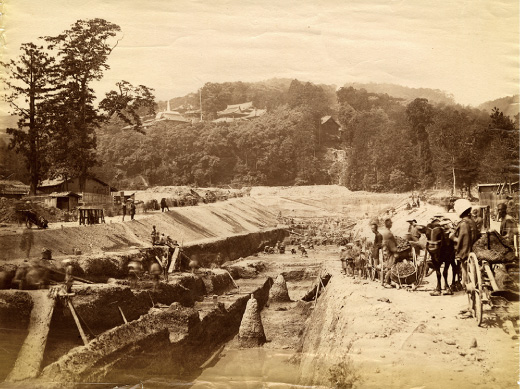 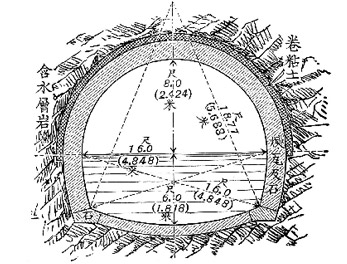 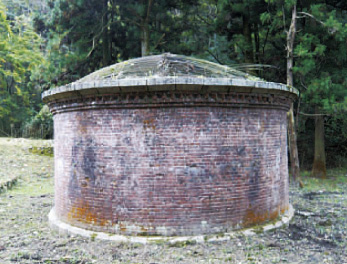 The first shaft of the First Tunnel 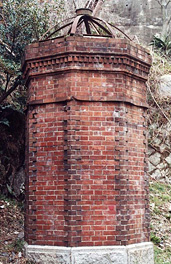 The second shaft of the First Tunnel

The Construction of the Second Canal
Further Development of the Lake Biwa Canal, Waterworks and Hydroelectric Power Generation

By Meiji 30s (1897~), the flow rate of the First Canal alone was not able to meet the ever-increasing demand for electricity, and furthermore, the deteriorating quality and quantity of drinking water (groundwater) troubled the people of the area.
Accordingly, Kikujiro Saigo, the second mayor of Kyoto, carried out what was called the three major projects: the construction of the Second Canal, the establishment of waterworks, road expansion, and the laying of electric tram tracks. Construction of the Second Canal, which was the most important of the three projects, began in Meiji 41 (1908) and completed in Meiji 45 (1912).

With the opening of the Second Canal and increase in flow rate, three power plants were constructed and the amount of power generated increased. The electricity generated by these power plants powered the trams on the new main roads, and electric lights were used to light up the city.
In Meiji 45 (1912), Keage Water Treatment Plant was completed and waterworks were established in Kyoto City for the first time. 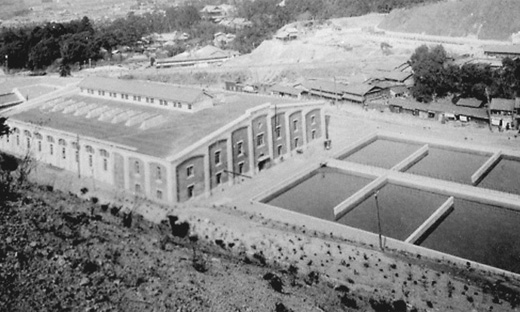 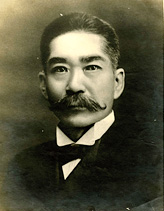 1861 – 1928
In October of Meiji 37 (1904), he became the second mayor of Kyoto City at the age of 42. While many projects were undertaken during his 7-year tenure until July, Meiji 44 (1911), his three major projects (the construction of the Second Canal, the establishment of waterworks, road expansion, and the laying of electric tram tracks) which lead to the reform and creation of the city's foundation was unparalleled both in scale and cost for Kyoto in recent times. He devoted himself to these projects and was quoted as saying "These projects will build the foundation of this city for the next hundred years. For the welfare of our future generations, we must endure for now, and we must be the ones to complete these projects", showing steadfast determination for the success of the projects. He was the son of Takamori Saigo.

Completion of the Canal
Lake Biwa Supporting Kyoto Throughout History

Water Rooted in the Area with a Variety of Uses

The abundant flow of its water has enriched the lives of many people.
In addition to its initial uses for transport, watermills, irrigation, and fire prevention, its abundant water was used for a variety of purposes and created new value.
One of its uses was providing water to be drawn to gardens. Starting with Aritomo Yamagata's villa Murin-an, large villas like Seiryutei and Hekiunso were built, and kaiyu-style Japanese gardens (gardens with a pond in the center and a path circulating around it) using water from the canal were created. The gardens of Heian Shrine, Maruyama Park and the current Kyoto National Museum also draw water from the canal.
Swimming pools and swimming areas making use of reservoirs were created in various locations. Among them, Ebisugawa Boat Reservoir was used by Kyoto Tosuikai Swimming School, and more than 50,000 people have attended swimming lessons there in the past 75 years. Kyoto Tosuikai has produced Olympic athletes and continue to be active to this day. 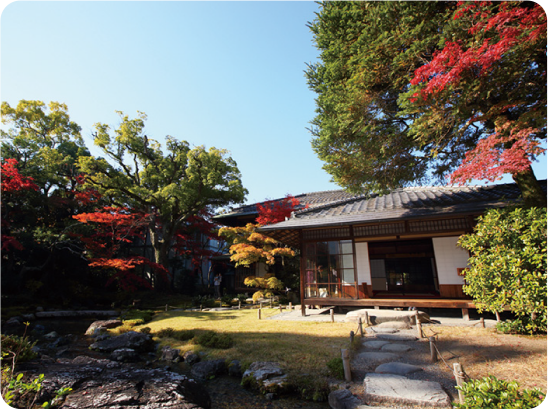 Lake Biwa Canal is a man made waterway, but with the passage of time, the landscape that exudes the charm of the four seasons has become a place of recreation for the public. In Showa 47 (1972), the area around one of the branch canals, Nyakuoji, was developed as "The Path of Philosophy", and it is now known nationwide as a place famous for its cherry blossoms. 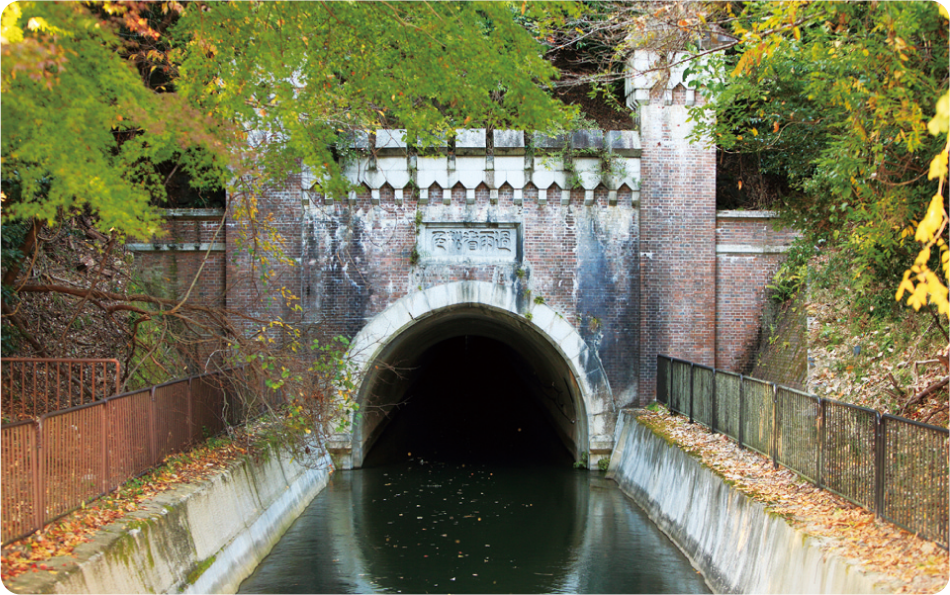 The east entrance of the Third Tunnel of the First Canal