Enjoy a 360-degree view in high definition of the many sights of the Lake Biwa Canal area (Otsu to Okazaki). 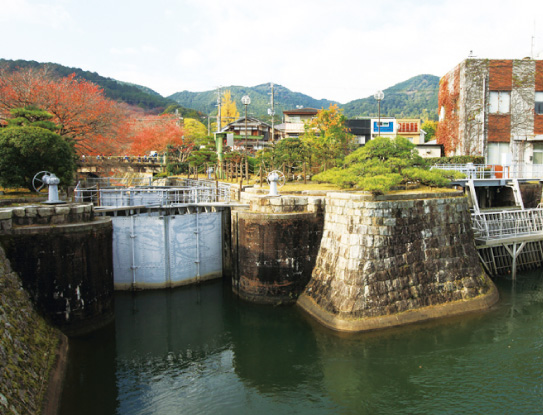 This is where gates are opened to allow boats to pass through and to adjust water levels. When it was first constructed, the gate was made of wood, requiring 4 men to open and close it manually. The handle for opening and closure still remains to this day.
At the time this gate was constructed, there was only one existing lock in Japan; it was located on the Kitakami River and was made of wood. Otsu Lock was the first full-scale lock to be made of brick and hence, it attracted much attention.

Above the end arches of each tunnel, you will see a stone tablet sign with calligraphy on it, which is called hengaku in Japanese. With the calligraphy on each having different meanings, these hengakus hold great historical significance as they were all inscribed by politicians who defined the Meiji period.

Meaning: The ever-changing scenery is magnificent 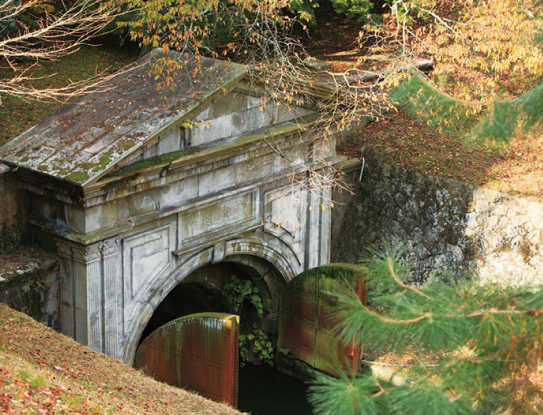 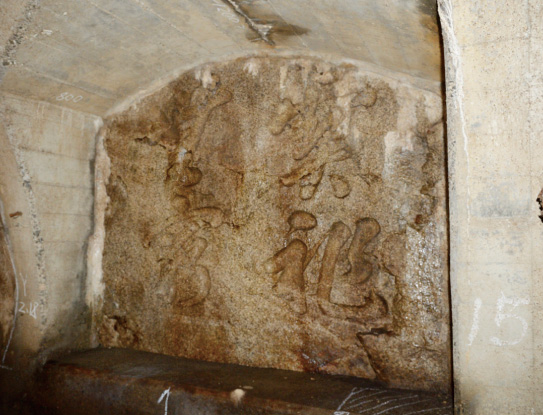 Kunimichi Kitagaki was the third governor of Kyoto Prefecture. In order to revive Kyoto which was suffering from economic decline following the relocation of the capital from Kyoto to Tokyo (which was one of the major measures taken during the Meiji Restoration), he implemented various measures to modernize it.
Of the many successful projects implemented by Kitagaki, one of the most representative was the planning and construction of Lake Biwa Canal.

Meaning: The Imperial Throne is eternal

※ The tablet is actually inside the tunnel and cannot be seen from the outside.

In order to excavate a tunnel stretching 2,436 meters, which was Japan’s longest at the time, while teams bored from both sides of the mountain, a vertical shaft was drilled downwards from the top of the mountain, enabling simultaneous boring from the center of the mountain towards both sides from the bottom of this shaft. This “shaft method” of excavation, which sped up the process, was a first for Japan. Overcoming strenuous challenges such as hard rock and large volumes of groundwater inflow, this shaft of depth 47 meters and a ground level diameter of 5.5 meters was finally completed.
※Access to the surrounding area is usually prohibited, but the shaft can be seen from the street. 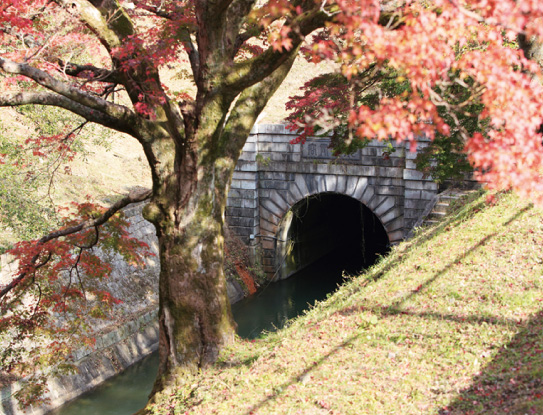 Above the west end of the First tunnel, there is a hengaku stone tablet inscribed by Aritomo Yamagata, Japan’s first foreign minister. The design of this arch is very similar to the design of the Troy and Greenfield Railroad’s Hoosac Tunnel in the United States (1874), so it is thought that Sakuro Tanabe has used it as a reference model.

Meaning: The earth, with a water filled canal, has depth and is spacious

Learning from the disastrous Great Hanshin-Awaji Earthquake, an emergency closure gate was installed in 1999 in order to automatically shut off water flow in case of an embankment failure induced by a major earthquake. The bridge that lies past the emergency closure gate was the first bridge to be completed during the construction of the canal. The original construction of the base built of red brick and stone can still be seen today. 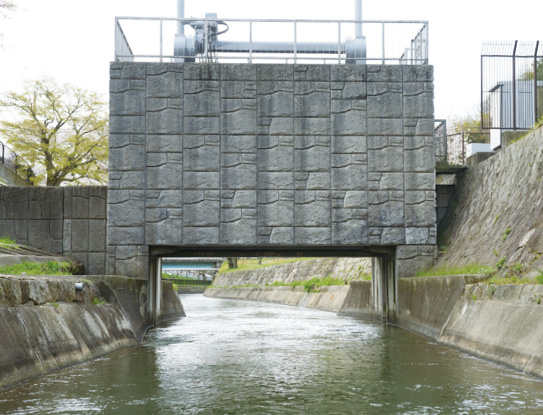 A funadamari is an anchoring area for boats to load and unload cargo and to allow passengers to embark and disembark. This was the first of its kind on the Otsu side and the area is well known for cherry blossoms in the spring. The entrance to the Moroha Tunnel (520 meters) built in 1970 during the construction of the JR Kosei Line is also located here. 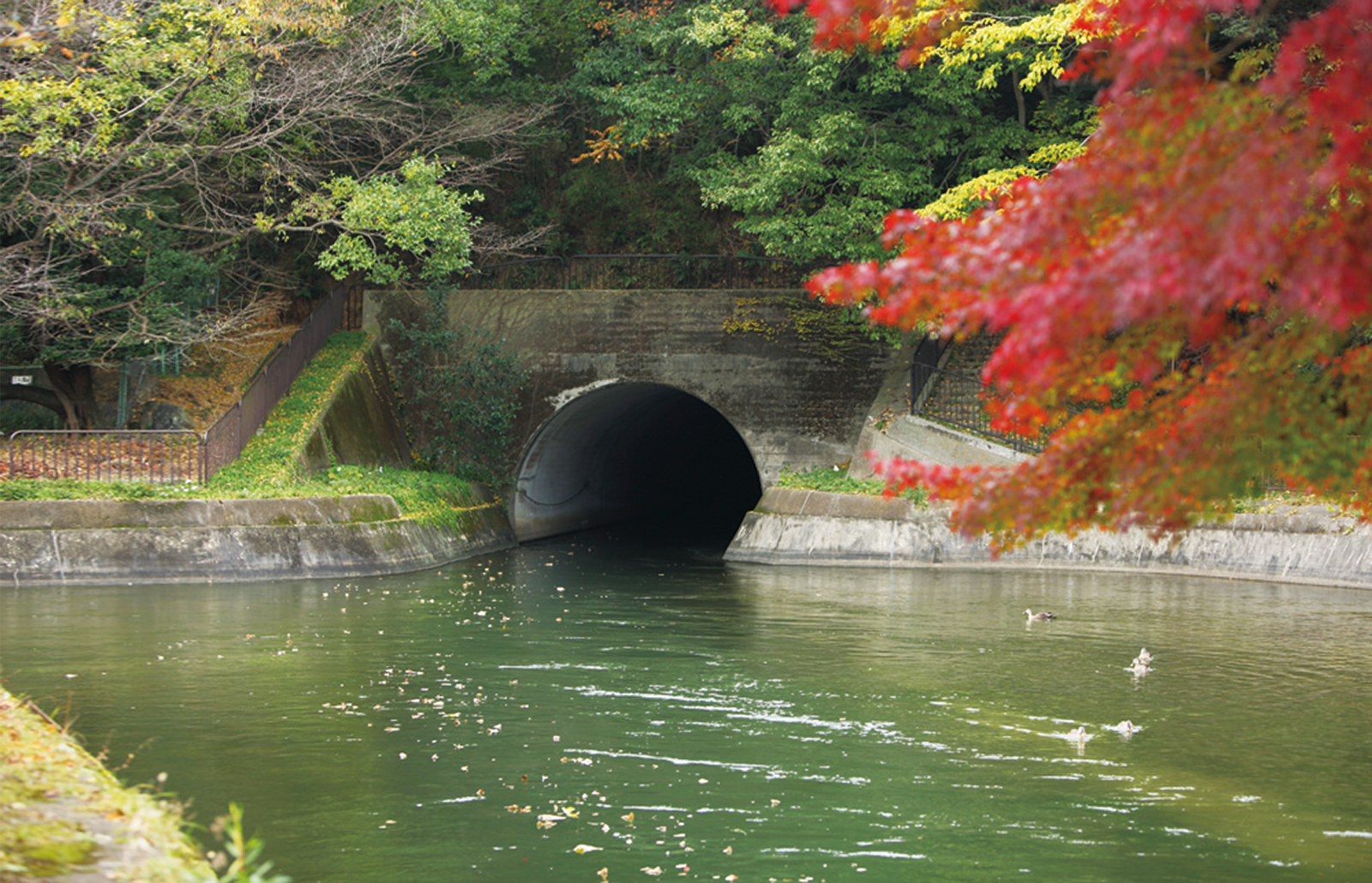 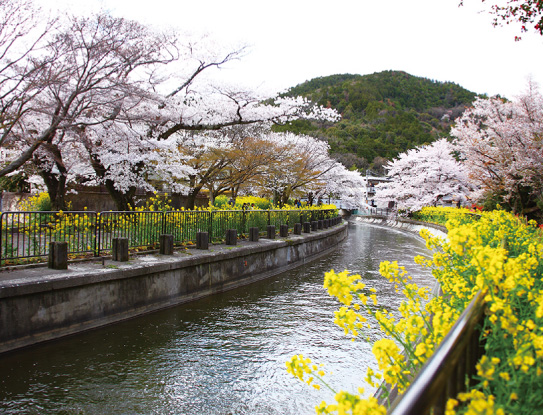 Anshu Bridge spans the approach to Bishamon-do Temple. The bridge is a famous spot for cherry blossoms in the spring, together with canola blossoms carefully tended by local residents. Further downstream, the Anshojigawa River which was orignally here before the canal’s construction can be seen flowing under the canal, creating a characteristic dual level intersection of water flow.

Here, you will be able to see an impressive bright vermillion bridge that crosses the canal diagonally. This bridge, together with the contrasting green of the maple leaves, leads to the Honkokuji Temple which is associated with the Buddhist monk Nichiren. Hongokuji was originally written in different Japanese characters, but came to be written in the current characters after lord Mitsukuni Tokugawa became a worshipper of the temple. At 124 meters in length, Second tunnel is the shortest tunnel on the route. Of all the hengaku stone tablets in the first canal, the one with the most word count is the one on the east end of Second tunnel: Jin wa yama wo motte yorokobi, chi wa mizu no tame ni yorokobu, written by the first home secretary, Kaoru Inoue. At first glance, it looks as though the words are written from left to right across two lines, but they are actually written in four columns, from top to bottom, which sets this tablet apart from others.
The west end arch of this tunnel is not semi-circular like those of other tunnels, but is slightly pointed at the top. On this end is a hengaku tablet written by the Meiji government’s first navy minister Tsugumichi Saigo, which says “Yama ni shitagaite, suigen ni itaru.” 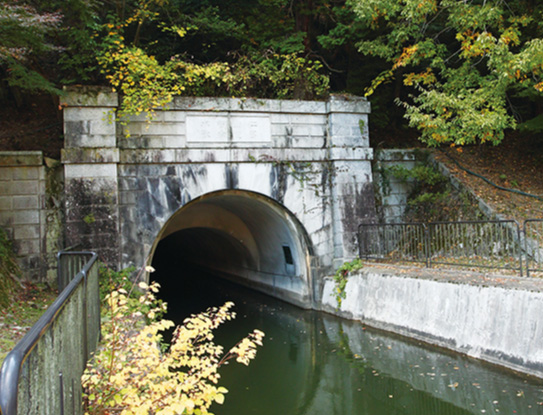 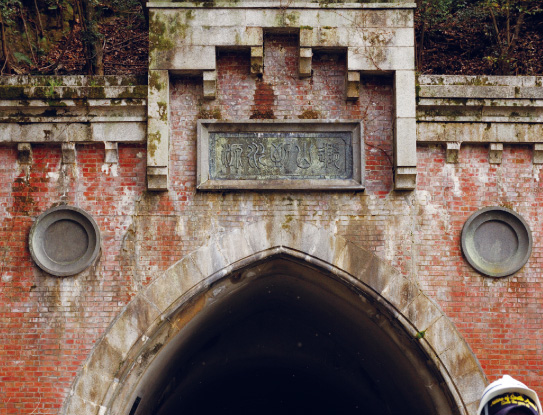 Meaning: If you proceed along(abide by) the mountains you will reach a water source At first, this bridge appears to be completely ordinary. It was, however, Japan’s first reinforced concrete bridge, built by Sakuro Tanabe in 1903. A stone monument stands next to the bridge and is inscribed with words meaning “Our Country’s First Reinforced Concrete Bridge.”

Third tunnel, which is located just downstream of 11th bridge, is 850 meters long.
On the eastern end of the tunnel, there is a stone tablet saying “Kau shoshoku wo miru,” written by Masayoshi Matsukata, who was the first minister of finance. On the western end is a tablet saying“Uruwashikikana sanga,” written by Sanutomi Sanjo who was Japan’s first Lord Keeper of the Privy Seal after the cabinet system was inaugurated. Next to the west end of the tunnel is the Keage Embarkation Area. One of its main attractions is the pump room for the water supply to the former Imperial Palace, which we will touch upon next. Meaning: When the rain shower passes, you can see the more vivid green of the pines Meaning: What a beautiful mountain river

“Imperial Palace Water Works System” was used to supply water exclusively to the palace for fire prevention purposes. The pump room sent water to a reservoir atop the mountain behind the palace so that water could be sprayed down, if need be, onto the roof of the Hall for State Ceremonies, which was the tallest building in the Imperial Palace grounds. The pump room was designed by Tokuma Katayama, the architect who is known for designing Kyoto National Museum, and built by the Imperial Household Agency. A stone tablet written by Sakuro Tanabe can be found above the canal’s confluence tunnel. At the age of 21, Tanabe, a fresh graduate from Kobu University (today, the Faculty of Engineering, Tokyo University) was appointed Chief Engineer for the construction of Lake Biwa Canal by governor Kitagaki.

SUIRI WO KARITE JINKO WO TASUKU

Meaning: The bountiful power of nature’s water shall be utilized for human work