Murin-an is a villa of Aritomo Yamagata, an elder statesman of the Meiji Era, which was built in Meiji 27 to 29 (1894 to1896), and its garden was designed by Jihei Ogawa the seventh.
It was designated as a national site of scenic beauty in Showa 26 (1951). In the second floor of the European-style mansion, the room used for "Murin-an Conference", in which Yamagata discussed with Hirobumi Ito and other fellows towards the Russo-Japanese War, is preserved in just the state it was back then and tells us the history.
The main house has a quiet garden with 180-degree panoramic view, where there is a cafe now. There are many villas around Nanzen-ji Temple, and Murin-an, a masterpiece of modern Japanese garden, is the only garden which is open to public throughout the year. 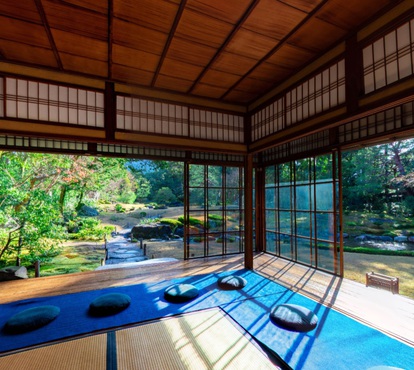